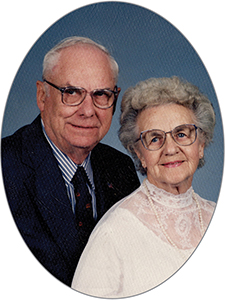 Above: Gene and Mary Facklam

Mary Facklam served on the Board of Directors over 10 years and was involved with the Center from the onstart in 1972.  She started as a key volunteer who performed just about every duty in the kitchen and dining room.  Mary was proud to be affiliated with a grass roots cause that relied entirely on volunteers in the beginning.  She saw a group of volunteers get together and work for a cause, a Board be created, a non-profit agency be created, and a  director being  hired - George Bartlett.  Through the over 20 years that Mary was involved she saw the need for funding to make this all happen.  In the beginning there were no salaries because it was all volunteers.  There was low operational expenses because  everything was donated and there were limited services.  As George Bartlett became more aware of the need of the seniors in the community and petitioned  to the State, County and City, more funding was given to the Center to expand programs.  Over the years Mary saw the influx of funding and also saw the funding end due to contract changes.  It was apparent to here that the most important thing for the long term success was ongoing support, not term limited or conditional. Read more about Mary's reflection on the Ukiah Senior Center in her interview under About US.  Mary passed away in May of 2006.

Gene found himself alone in the large house and property that they had shared for many years on Road B in Redwood Valley.  In 2007, the Outreach staff at the Center started receiving requests from Adult Protective Services to check Gene.  Apparentally it was becoming known that his condition was questionable with reports of him falling down numerous times in his home and not being able to get up.  For about two years, the Center looked over Gene while he was in Redwood Valley.  He was taken to medical appointments, helped with grocery shopping, repairs around the house and equipped with life alert medical devices in case of a fall.  We were first on his contact list and would respond to his home many times to either take him to the doctor's office or discuss his situation with medics when they arrived.  Eventually Gene realized that the home was too much for him and asked the Center to help him pack up his belongings and find a more suitable living situation.  Thanks to a very dedicated volunteer, Floyd Knox, who had become Gene's right hand support, every content of Gene's vast estate was packed up and put into storage units.  Gene's final "home" ended up being Mountain View Assisted Living in Ukiah.  At that time, Gene was in his 90's and his health was rapidly declining.  He decided that he wanted to give his household belongings to the Ukiah Senior Center and wanted to help with the sale of the items.  He gave the Center the money to purchase a shed to be constructed as the "Antique Barn" along side the garage at the Senior Center.  Gene worked with another long-term volunteer, Ava Davis who was the previous Thrift Store manager.  Ava had extensive knowledge of antiques and was delighted to work along side Gene and Floyd to take on this monumental project.  They painstakingly inventoried every treasured item in Gene and Mary's life long estate.  Boy, did they have a life! Gene had been in the service and they had collectibles from all around the world.  In the course of three years, close to $40,000 was made on the sale sale of their belongings.  In October 2011, Gene passed away.  In his final estate he and Mary left one half of their estate to the Ukiah Senior Center a very generous sum of $604,000.  This money was left directly to the Ukiah Senior Center to be used for operational support.  The Board of Directors investment committee has the contribution diversly invested to allow for safety, growth and a annual distribution for operations.

Next: Thelma and Henry Strong »

We appreciate your support! Whether you have time and expertise to volunteer or would like to consider bequeathing your estate, we'll be sure to put your donation to good use. Click here to learn more.